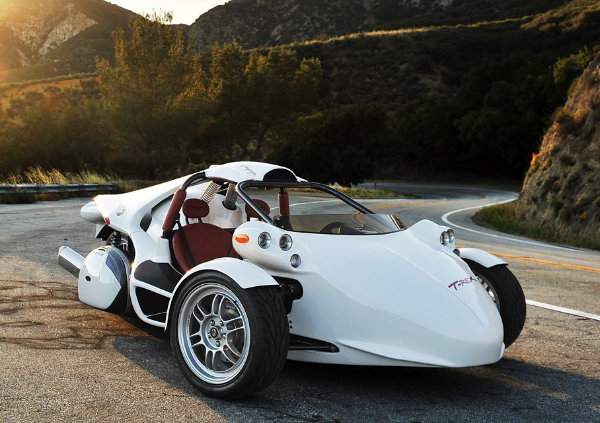 I’m sure many of you have seen the T-Rex by Campagna Motors. For those recently coming out from under the rock, the T-Rex is a futuristic-looking three-wheeler with some impressive performance specifications.

They have now announced that Campagna Motors have teamed up with Zero motorcycles to produce an all-electric version which I would guess, inevitably, will become known as the “E-Rex”.

The prototype is to be unveiled next week at the Montreal EV Show. They are already working on a more advanced prototype, which could be ready by the end of the summer.

André Morissette, president of Campagna Motors said: “Thanks to the hard work of our dedicated team and partners, the T-REX has become the benchmark for three-wheeled performance. Our collaboration with Zero Motorcycles brings a whole new level of innovation and originality to this already exhilarating platform.”

Zero Motorcycles, already a tour-de-force in the electric motorcycle field have been working with other companies recently to help adopt their powertrain technologies.

Zero Motorcycle’s Director of Business Development Jim Callahan commented on the partnership with Campagna Motors: “We’re excited that Campagna selected our industry-leading powertrain technology to develop their electric T-REX. Zero’s electric powertrain is an ideal solution for the ultimate three-wheeled experience. This vehicle is an absolute thrill to drive.”

The current T-Rex, with its 160 BHP BMW engine, and weighing in at 1.157 lbs, boasts some impressive performance specifications, such as a 0-60 MPH time of 3.9 seconds. Inevitably, the battery pack is going to add significant weight, but it will be interesting to see the performance and driving (riding?) characteristics given by the prodigious torque of an electric drivetrain.

I, for one, am excited about the future of electric motorcycles, and this seems an ideal venture to explore the possibilities of an electric motor in an already exciting vehicle. Watch this space…

I hope you find these posts useful. If you do, please consider supporting, while gaining access to all this information, and more, by purchasing: Motorcycle Mastery - Advanced Techniques for the Smart Rider. It's available for all e-readers and in print.
←London Fire Brigade Launches Biker Down! Scheme