You may remember from my last post, that it was left on a bit of a cliffhanger. I ended by posing the following question: What do you do if you have just made a left turn into a street, with following traffic, but you’re going to immediately turn left again into, say, a garage/gas station forecourt? The signal from your left turn won’t do you any good now, because you haven’t had time to cancel it, and start a new one.

This brings us to the subject of this week’s post: Signal Reinforcement.

What do you do in the above circumstance? You consider reinforcing that left signal with an arm signal. You have just made the left turn, you want to immediately turn left into the forecourt, you leave your signal on and then reinforce it with an arm signal. This will indicate to the drivers behind that you are making another left turn, and it will definitely get their attention! Clearly, careful inspection of your mirrors would be called for here, and don’t be afraid to simply abort the second turn if you are not sure that the drivers behind have seen your intentions.

Here is another example where you may consider signal reinforcement:

In this instance, my intention is to turn right into the smaller road — not the larger road just beyond it. Clearly, it would be quite natural for the drivers behind to assume from my signal that my intention is to turn onto the larger road. There is a danger that the following drivers could run into the back of me as I unexpectedly make the sooner turn.

In this instance, I would consider reinforcing my signal with an arm signal. The very fact that I am executing an arm signal will alert the following drivers that something unusual is happening, and hopefully prompt them into extra care.

As an exercise, think of other instances when a signal reinforcement could be useful.

So, it turns out that the humble act of signalling is a bit more involved than it would at first seem. It is certainly not complicated, but, like everything else about good riding, it deserves actual, logical thought.

Before we leave the subjects of signals and signalling, I would like to talk about how we deal with signals from other road users.

Signals from other road users can take the form of electronic turn signals fitted to vehicles, things such as headlight flashes, or arm/hand signals.

Well, it turns out that sometimes, the very best thing to do with another road user’s signal is to ignore it!

Let’s look at some examples of potentially false signals from other road users, but before we do, I would like to give you one sage piece of advice that can literally save your life:

The only thing a flashing turn signal proves, is that the bulb is working!

What this means is that we should never make our decisions about whether it is safe to perform a manoeuvre based solely on another road user’s signal — no matter what form that signal may take.

Here is just one example: 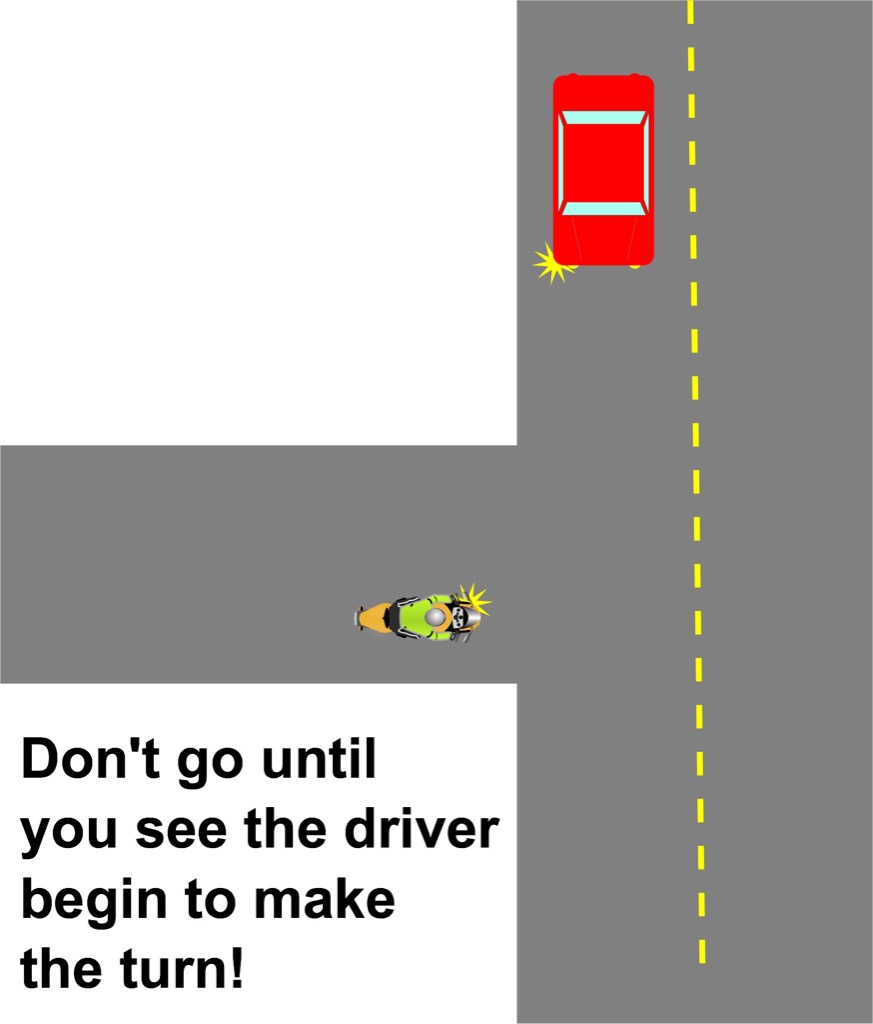 You’re waiting to turn left out of a junction. There is a car approaching from the left with its right turn signal on. Are you safe to go? No, no and NO!

That car driver could have left that signal on from a previous turn, or could even be intending to turn right after the junction. So, we will wait until we actually see the car begin its turn before making any move.

Invitations to Disaster – The “Unofficial Signals”

These are the hand waves, the headlight flashes, the nods, the “waving you past” or any other motion that a creative mind can come up with. We see this all the time, and it’s very tempting to do it ourselves — and to act on it when others do it. But, beware! They can be invitations to disaster.

It’s important to remember that we — and we alone — are responsible for every action we take when out on the road. This reminds me of the saying: “The road to hell is paved with good intentions.”

Let me demonstrate this with a scenario that happened to me a little while back. If I had simply acted on the drivers well-intentioned gesture, It would have led to a very miserable day: 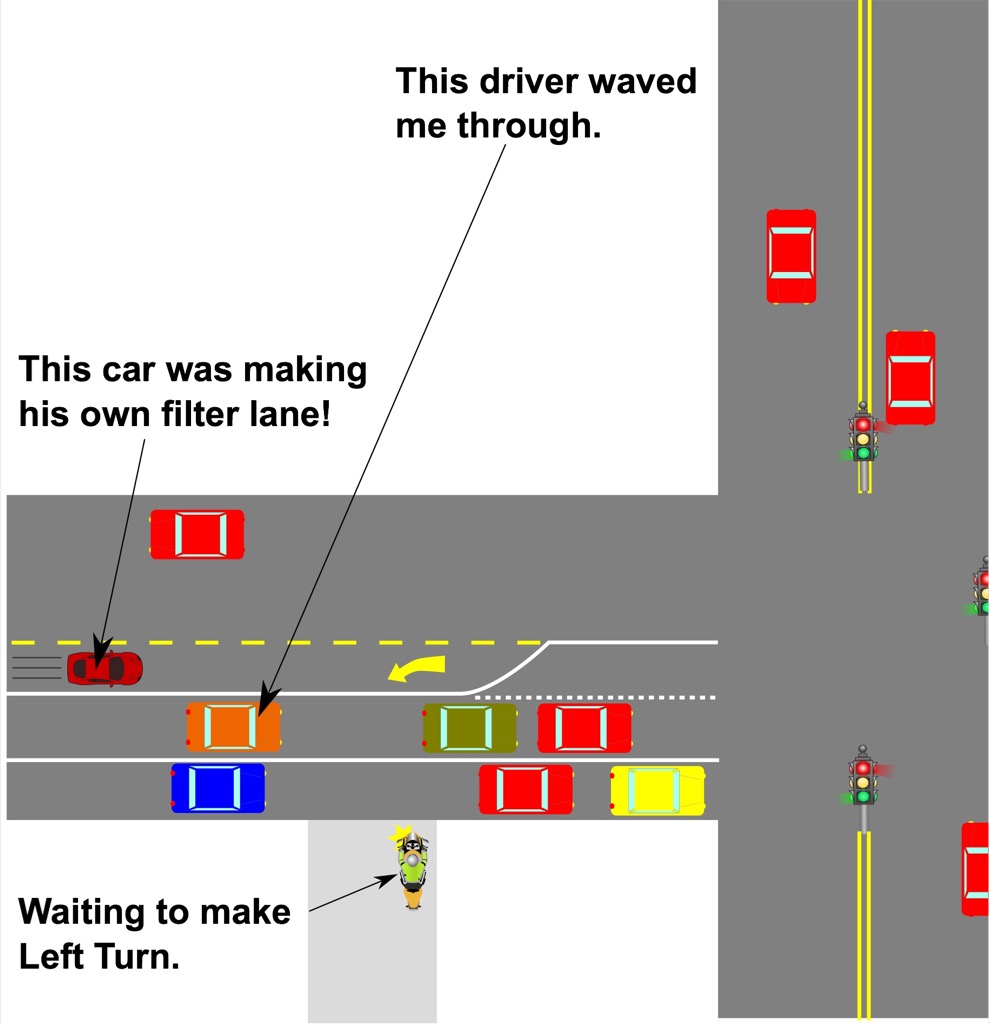 I was attempting to exit left from a gas station, which was very close to a busy junction with traffic lights. A well-intentioned driver stopped short of my position, and, using an “unofficial” signal, waved for me to come out.

The prudent thing to do in this situation is to thank the driver, but assess the situation as if no such invitation has been given.

Fortunately, this is exactly what I did, and edged out using extra vigilance precisely because another road user had invited me to make a manoeuvre.

Sure enough, there was a driver creating his own filter lane (using the divider before the filter lane has actually started), and was bearing down at a great rate of speed. Had I have simply taken the driver’s invitation, it would have been a disaster.

(Incidentally, about two months later, I passed this spot, where the police were dealing with the aftermath of a crash. I had the opportunity to speak to the driver of the antique truck that was sitting smashed in the middle of the road. Sure enough, exactly the same scenario had played out — but the driver had responded to the well-intentioned signal of another driver).

This is just one example of many where it can be seen that an invitation from any other road user that it is safe to execute a manoeuvre is worth precisely the paper it’s written on!

If another road user “invites” you to perform a manoeuvre, take that as a trigger to practise extra vigilance, for it is a hazard in itself.

As strange as it may feel, if you decide that you would like to let another driver out of, say, a junction, simply stop or slow, and make eye contact. Resist the temptation to act as their “eyes and ears”, or to make any other indication that it is safe for them to go. It is their responsibility to decide to make the manoeuvre, and theirs alone.

Similarly, I have sometimes seen a practice that makes me nervous when people are riding in groups. One of the riders will commence an overtake — a pass, and will hold his or her arm up to signal to the riders behind that it is safe for them to follow. In my opinion, this definitely comes under the category of “invitation to disaster”. To me, that would constitute a hazard and cause me to make the decision to not pass at that point.

Again, every move you make should be of your own volition, and only made after careful consideration in the absence of any “invitation” from another road user.

This may take a little effort to break some well-ingrained habits, but it will pay dividends in keeping you safe, and that’s what this is all about!

That’s all for this post. Stay safe out there!

I hope you find these posts useful. If you do, please consider supporting, while gaining access to all this information, and more, by purchasing: Motorcycle Mastery - Advanced Techniques for the Smart Rider. It's available for all e-readers and in print.
←Signalling on a Motorcycle Positioning - Part One→