So, let’s wrap this series up with those places we don’t wish to be when on the road:

The Triangle of Death!

When adjusting your position following a vehicle, make very sure you do not enter The Triangle of Death! See the image below: 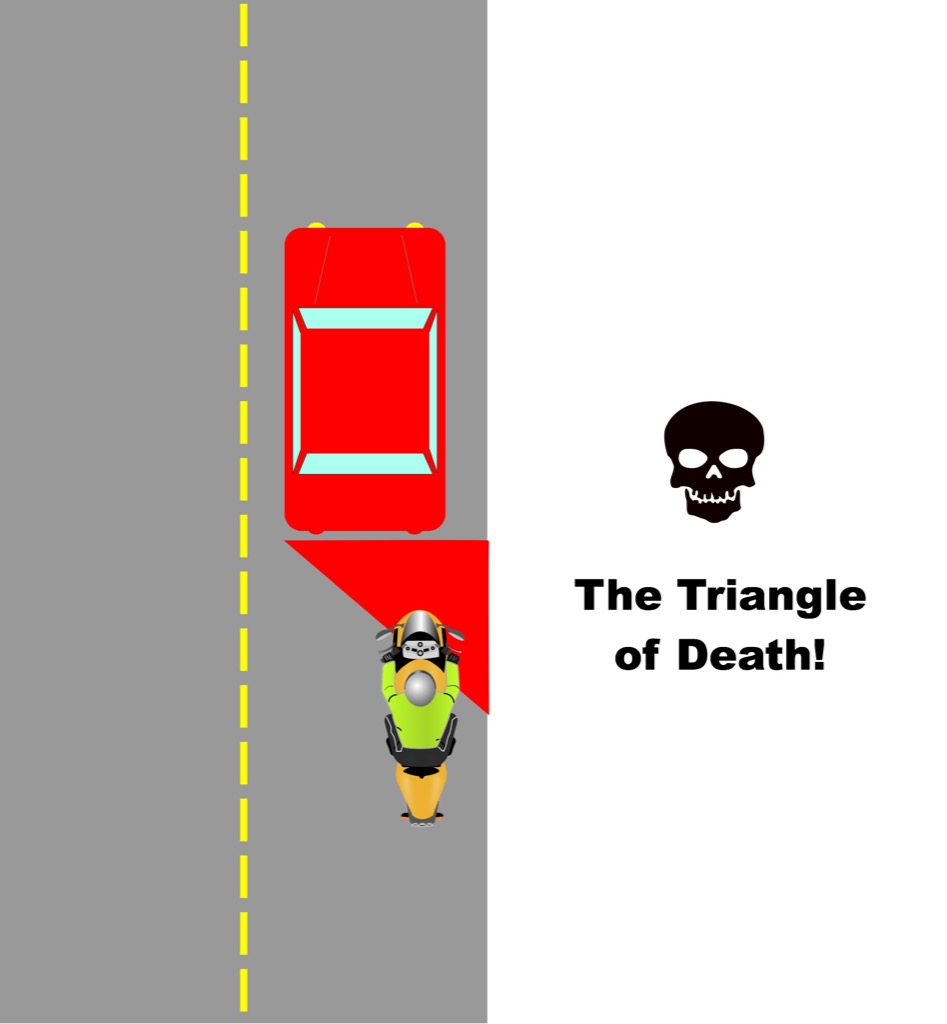 Here be dragons. Seriously, you never want to be there. I see many riders sitting in the triangle of death, and it makes me cringe.

Of course, if you remember the two-second rule as discussed in the chapter on Following Distance and Riding Speed, you will be safe from the triangle of death. If in doubt, drop back. You will get a much better view.

All vehicles have blind spots, which are areas of the vehicle’s surroundings that cannot be seen either through the mirrors or by looking directly without the driver moving their head. Some vehicles are worse than others in this respect.

It is important for us to be aware of these blind spots, and to do our utmost to spend as little time as possible in these areas.

Take a look at the diagram below:

If you find yourself occupying this position, make a determined effort to get out of the blind spot as soon as possible either by dropping back, or moving forward so that you are at least alongside the car, and out of its blind spot.

Be aware that larger vehicles such as trucks/lorries have a much larger blind spot because they don’t have an interior rear-view mirror. Take extra care behind these larger vehicles, and remember that if you can’t see their mirrors, the driver cannot see you.

Well, that wraps up the first series of posts on positioning on a motorcycle. Remember, we will later be covering the whole important topic of positioning when cornering—a subject that will, I’m sure, transform your riding! Remember, you can subscribe to be alerted as new posts are added.

Until next time, ride safely, and have fun!

I hope you find these posts useful. If you do, please consider supporting, while gaining access to all this information, and more, by purchasing: Motorcycle Mastery - Advanced Techniques for the Smart Rider. It's available for all e-readers and in print.
←Positioning - Part Two Scanning and Hazard Fixation→